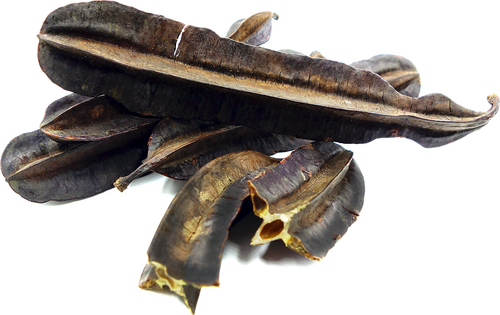 The fruit is conventionally used as spice and as a natural multivitamins. It is rich in protein, lipids, potassium, iron, magnesium, phosphorous, and vitamin C. In Nigeria, it is cooked in soup and fed to mothers to prevent post-partum contraction. In Ghana, prekese has been used to flavor soft drinks. The drink has been approved by the Food and Drugs board, and is marketed to reduce hypertension, decrease the severity of asthma attacks, and promote blood flow.

A person who is recovering from a medical condition is often asked to bathe with water soaked with whole fruit. This also gives fast relief from feverish conditions. Similar infusion also helps people suffering from constipation, enema, and emetic.

Edeminang pod is used as an additive in the soup which is served to postpartum mother to avoid contraction. The pods are rich in potassium, iron, and calcium which are the three most important ingredients required for postpartum woman. The soup also helps in the production of milk in new mothers and helps to restore the lost blood.

can be used for reducing inflammation of the body, arthritic pains and rheumatoid pains

TREATMENT OF GASTROINTESTINAL DISORDERS: The fruit can be used for treating gastrointestinal disorders such as stomach pain, diarrhea, vomiting .

Tetrapleura tetraptera fruit has important antimalarial and analgesic activities. Its use in traditional medicine is widespread for the treatment of asthma, ulcer, epilepsy, diabetes, hypertension, convulsions, leprosy, inflammations and / or rheumatic pains, in hypertension arterial (to lower blood pressure), and as a contraceptive. Leaves, bark, roots and grains are used.
TRADITIONAL TREATMENT
This fruit is also traditional treatment. For women who suffer from cysts and some infertility. They must not be operated on. They must take the fleshy parts and put them in a container of water, after soaking them a few minutes, they will have to drink in half a glass while doing their purge.
It will be necessary to let the remedy act and if the women will want to relieve themselves or go to the pot. That they do it every day.
One month later, she will have to do an ultrasound, the probability that the dry cyst is 99%. This fruit has many virtues and also treats back pain. Very effective!